TAKE A CUE FROM STREETWEAR’S ROYALTY NOW, THANK US LATER.

What may be streetwear’s best kept secret comes in the form of husband and wife designer duo Bam Barcena and Lanie Alabanza-Barcena.

Partners in life and partners in crime, the two have been hustling from the get go, following dreams and building an empire that includes several streetwear brands – Hellz Bellz and BOTB for the ladies, GPPR and Junya Mafia for the gents (et. al, you will soon find out) – a newly launched concept store and, most importantly, new ways of thinking.

Growing up in San Diego – Lanie in the Chicano culture, Bam in skate – the two have always been at the heart of the streetwear pulse. While Lanie originally set out to do graphic design and Bam a music career that included DJ gigs for Eminem and Lauryn Hill, the two found themselves wound to the streets and to each other.

Now, the couple revels fully in their current set-up where lines are blurred between work and play and perpetual creative highs are experienced. Getting to this point wasn’t easy though. For Lanie, it entailed a series of internships, jobs and a corresponding move to New York where she braved the city jobless and with the support of her parents in the form of a meager twenty dollars. After interview schedules gone haywire that entailed waiting another jobless month, she hit the job hunt and found one in no time. Her determination, more than just talent, was probably what got her a job at Rocawear under music mogul Jay-Z. While she happily recounts what it was like working with the talented Jay-Z (who she says is a fast learner and very down to earth), her job at Rocawear was what prompted her to come up with her own line – out of creative frustration. 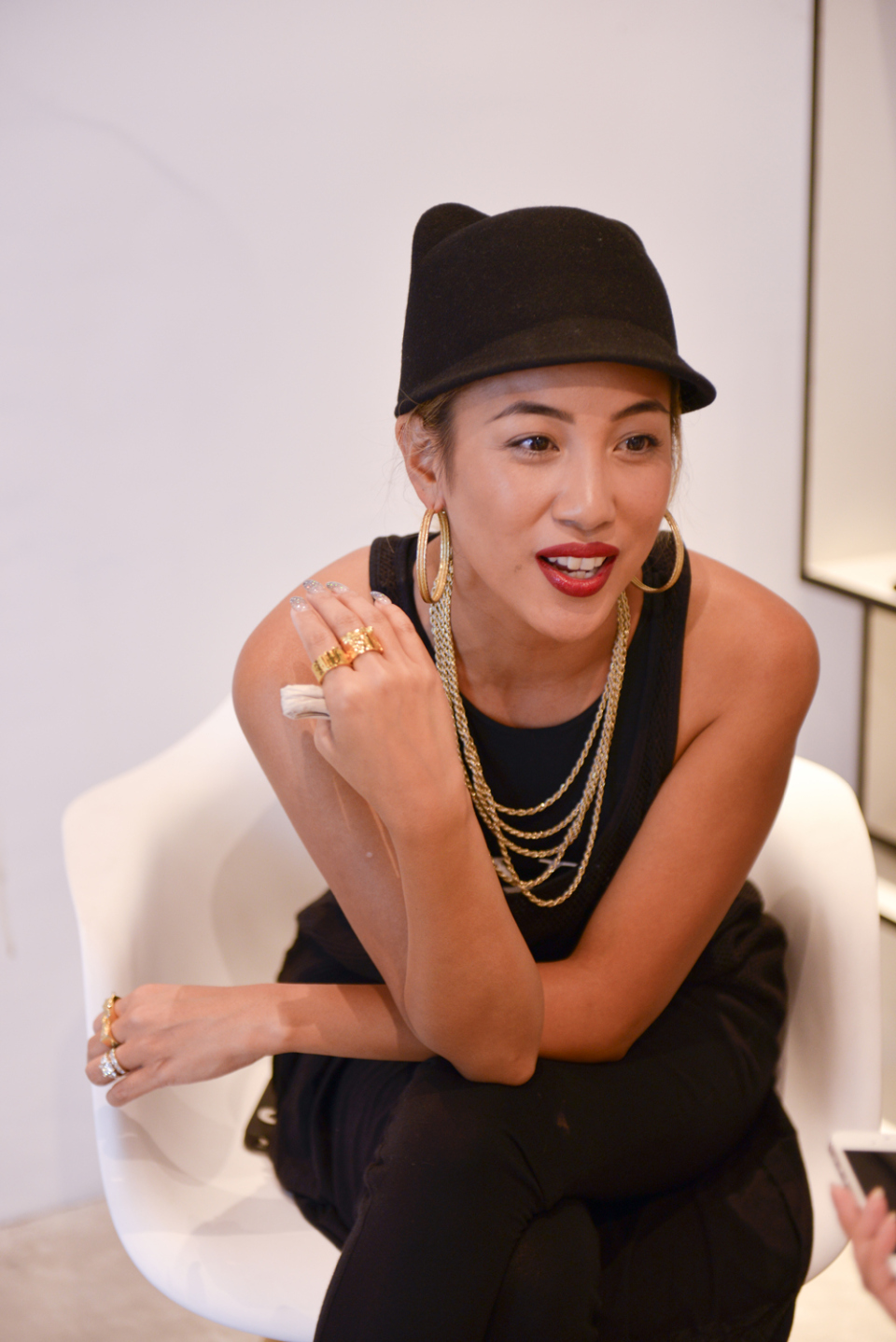 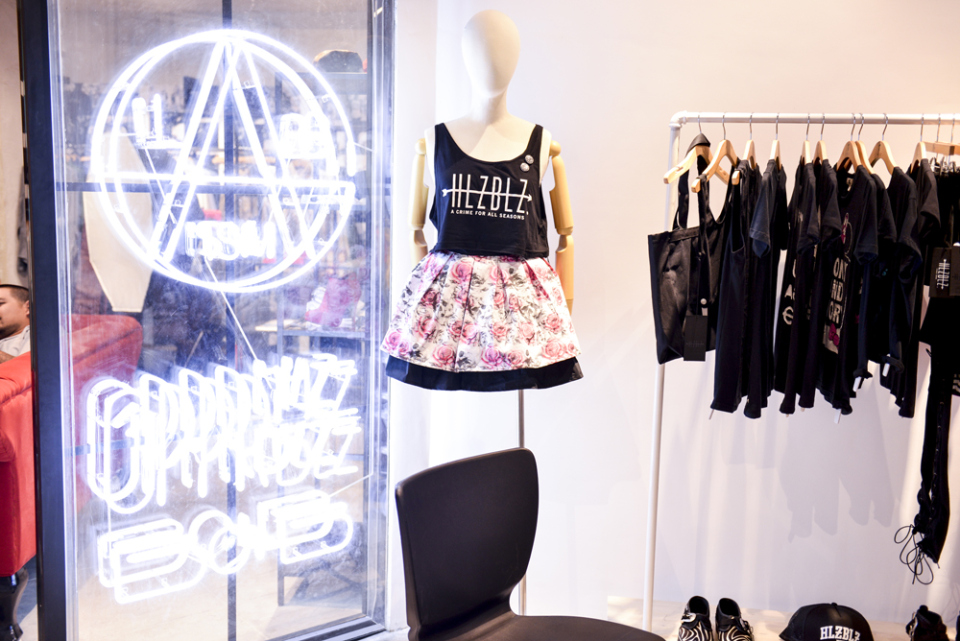 Creatives always need an outlet and Hellz was born shortly after. What started out as a passion project took off and has been paving the way for both female streetwear brands and female streetwear designers alike. Being a female in what was then a male-driven industry had its downside. A number of times, Lanie would hear snide comments doubting her role in the brand. “They were saying things here and there, like ‘I don’t know if she’s really the one designing the graphics’ and whatnot,” she recounts. Thankfully, she learned to shut them out. “Now the scene is growing and I think we [females] are being respected more, we’re kind of giving guys a run for their money.” She even quips, “It’s nice to know I’ve kind of nailed something in there.” 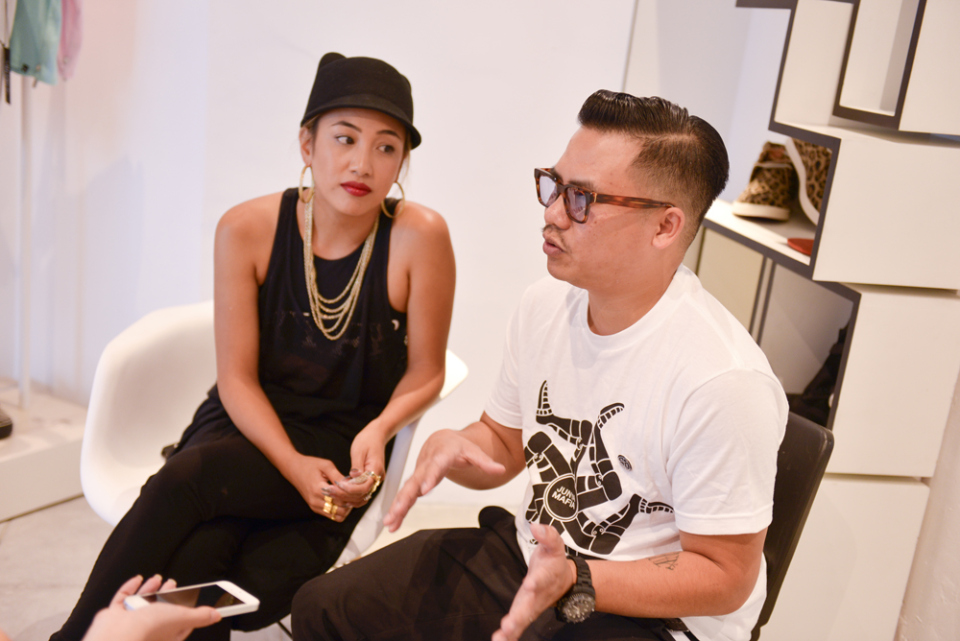 But slack wasn’t given by competitors in the industry, much to everyone’s surprise. “Everyone thinks there’s so much competition behind it but when you see us we’re like a family,” Lanie explains. “We were all working together – different brands, different projects – it was nice to see everyone grow together,” Bam adds. He even shared how Dennis Calvero from Crooks and Castles has been looking out for them since day one. “When Crooks first started they had a trade show – they had the smallest rack and Denis was like, ‘here you can have the other half for Hellz,’” Bam recounts. Lanie also considers Dennis as of one her biggest mentors although she confesses that Dennis probably isn’t aware of that at all. “I just soaked everything in – even the smallest lessons in Excel,” she shares.

While Hellz is Lanie’s brainchild, Bam played a big role in its success. “We’ve been working together since 2003. I learned a lot from him,” she shares. Bam’s decision to come up with his own passion project was mostly due to the fact that he wanted to create clothes he too could wear (we understand.) The result: a brand that represents just about the entire male population. GPPR stands for The Gentleman, The Philosopher, The Pervert and The Rebel. “Those are the four elements that kind of represent me and my friends – there’s a switch – one day we’ll be a gentleman, the next a rebel,” Bam fondly shares. He says since it’s very tongue in cheek, designing for an archetype doesn’t entail acting it out – unfortunately for Lanie who shared that her favorite sides of Bam are the Pervert and the Rebel. “Mostly because he’s alway a gentleman,” she adds. Whether his design process will change – with a lot more character internalization given this new insight -that’s up to him. What we do know is that while most couples cannot handle working together – creative geniuses and love don’t always mesh well – their creative process works for them. “We’re able to respect each other’s craft,” Bam says of the secret to their dynamic. “She’s really talented so we balanced each other out.” Lanie credits it to Bam too, of course, as love for streetwear plays a big role in what makes their relationship work. “I cant imagine being with someone who I couldn’t relate to on a personal level,” she shares. 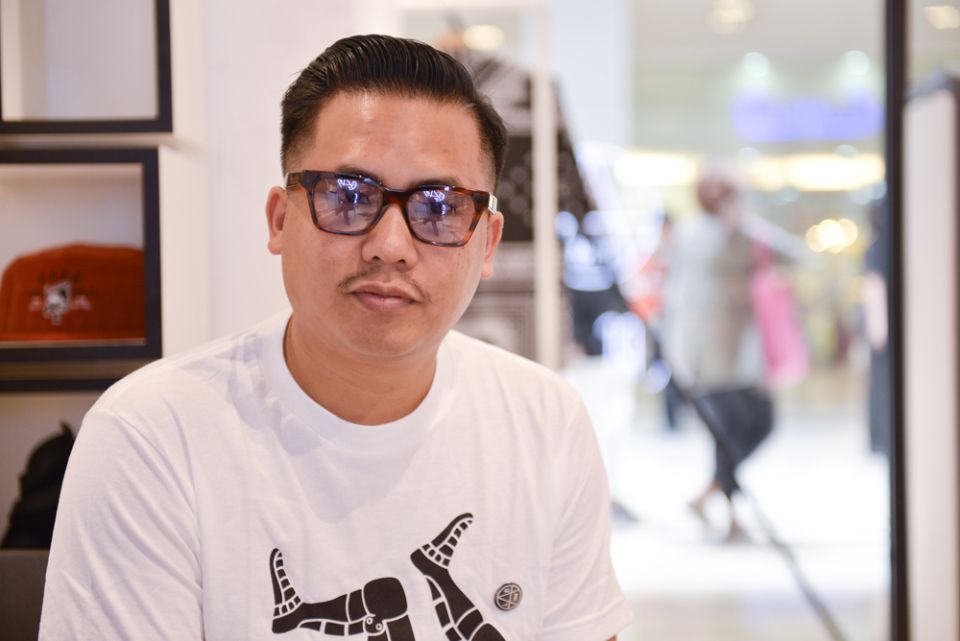 Fruits of this creative marriage include collaborations with different dream brands – Hellz with Vans, and soon, Hellz with Sanrio, a brand Lanie has loved since childhood. They both also launched sister brands each – BOTB for Lanie and Junya Mafia for Bam – one that, on its very first season, is garnering amazing reception. Not that they make brands for the fortune and the success. Truly, all that they have launched so far were passion projects turned hits.  GPPR’s include a collaboration with Manila lifestyle brand, Trilogy. A new venture for the couple that will hopefully serve as a beacon of streetwear hope in the Philippines is Labism, their concept store short for “Lanie & Bam-ism”. Labism is set to house the couple’s different brands and their collaborations with other streetwear players they want to introduce to Manila, the city they hailed from. 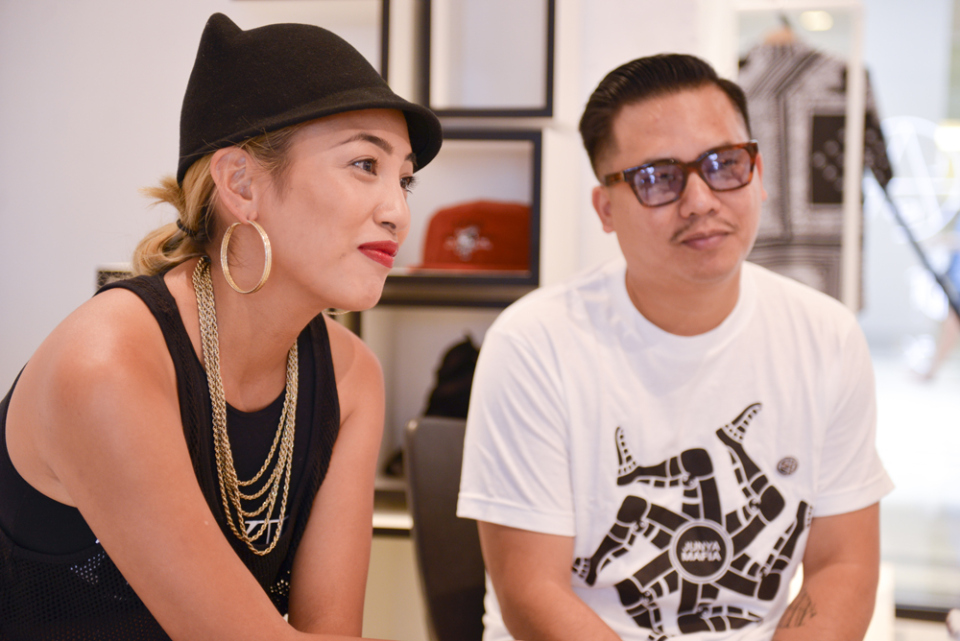 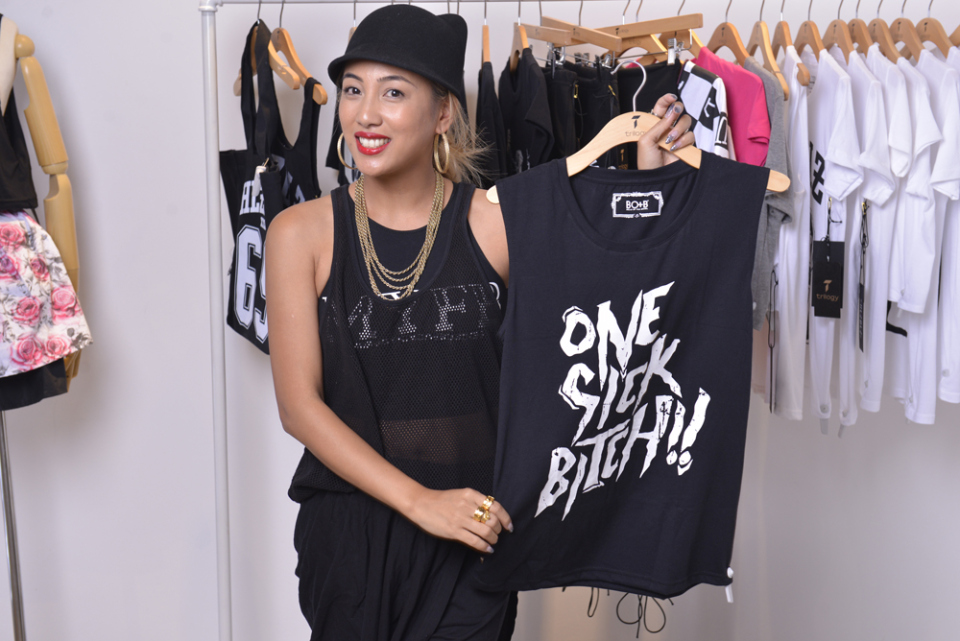 They have big dreams for their home country. “It’s growing,” says Lanie of the streetwear scene in Manila – one that they have been following since 2008. But what exactly do they want to see it grow into? More than size, they want identity. Bam looks to Japan for inspiration. “Japan took American streetwear, flipped it, regurgitated it and made it ten times better. There’s so much talent here they just need to see that its possible and then when they see streetwear I’m sure theyre gonna flip it too.”

It’s safe to say the two are definitely at the forefront of the streetwear game – a feat that resulted from a long and arduous grind – one of the things the couple reminds the youth of. “You have to continue to grind. You have to contintue to be hungry,” Lanie says. “There’s no way I could’ve started my brand if I had no experience,” Lanie shares. That goes for both of them with their numerous internships, jobs, even failed brands. “You gotta pay your dues. Go out there, get a job in the industry and take in as much as you can,” Bam says trying to debunk the prevalent notion that starting a brand- minus the experience – is easy. Lanie adds, “The moment you stop being hungry, you get complacent and I never want to be at the point where I feel complacent or feel like I’ve done enough. There’s always something more that I can achieve.”

Whether more means adding brands or venturing into other businesses, we’ll have to wait and see. As of now the couple has their hands full with their own lines and helping out other streetwear brands on the side. Now, though we didn’t coin the term “Streetwear’s Best Kept Secret” for these two (a friend of theirs did), we think they really are and while we wanted to keep this secret all to ourselves out of sheer selfishness, we think it would benefit us all to indulge in their story. So be inspired and create. 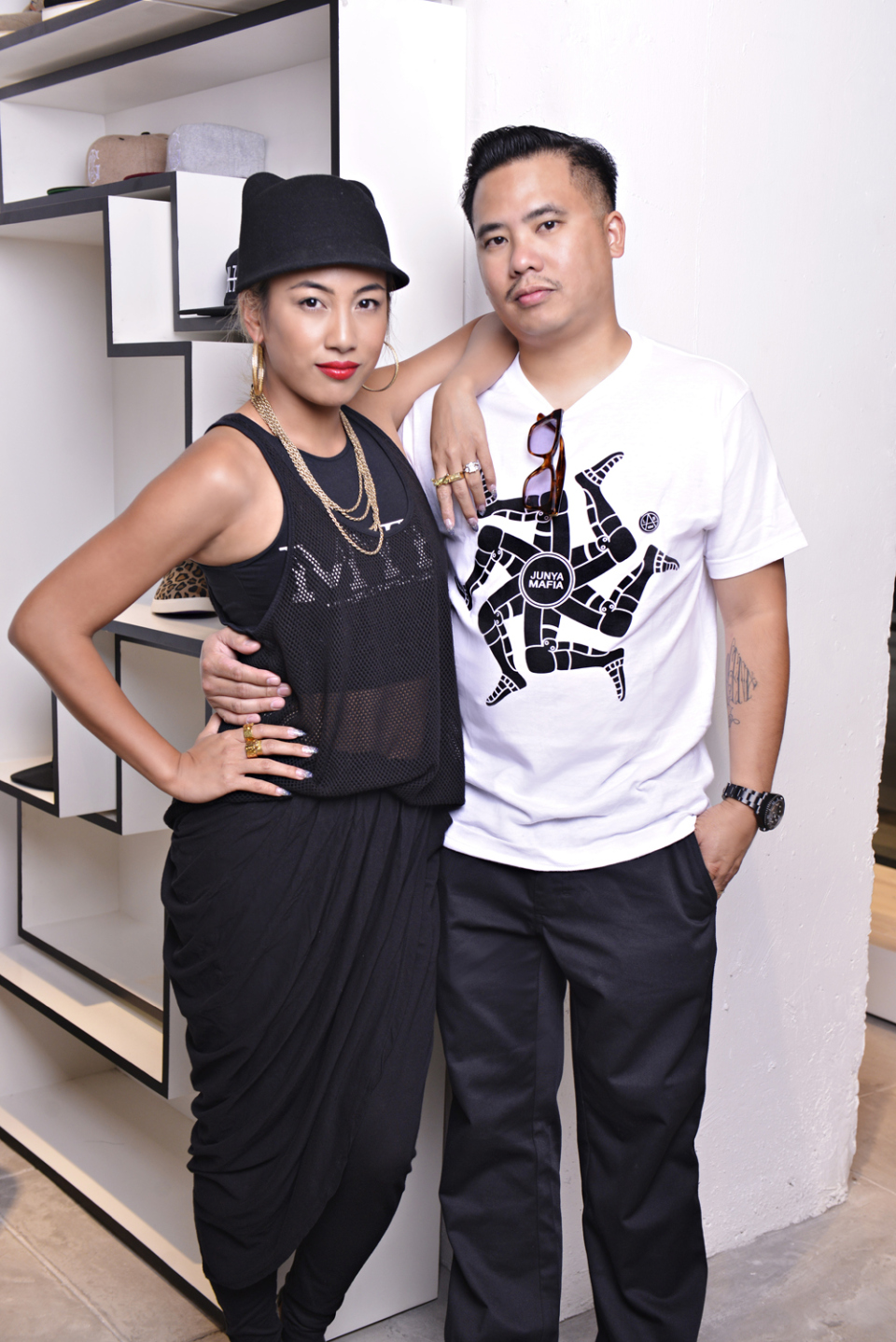